Every day we make a choice and in that moment we decide which voice to listen to: insecurity, self-loathing, fear, reason, all of whom would be nothing without the energy we give them…  Juliana is selective in this regard, listening only to her Intuition and the advice of those she admires.

It has been six months since I penned my first portrait of Juliana Lazzaro. When I composed the phrase “Art in Motion,” it was in reference to the hand-painted fashion that she was working on at the time. What I did not realize is just how accurately it would describe the larger story arc at play. Juliana often talks about “the journey,” and hers is a creative Odyssey with as many obstacles as there are breakthroughs. She has just arrived at another peak, having moved through the particularly low-lying terrain of downtown Manhattan. But before I get to the jewels, allow me to take a breath and talk instead of the method behind the work.

The Juliana that I know has never been one to favor shortcuts for the sake of expediency. Her path has been about cultivating an endurance that is rare in our automated world. In part I, I said that she is “an artist who creates and then sustains herself through vision and resourcefulness.” Despite the simplicity of this statement, her lifestyle requires sustained effort and constant attention.

“Simple can be harder than complex. You have to work hard to get your thinking clean to make it simple. But it’s worth it in the end, because once you get there, you can move mountains.”
-Steve Jobs

Her fortitude and purist sensibility is a family trait.  It took her father, Frank, and her brothers twelve years to handcraft a log cabin utilizing the Scandinavian full scribe technique.  Using milled logs would have been much easier, but the irregularities in the logs brought about an aesthetic perfection that could not otherwise been realized.  This is the stock from which Juliana was made.

Inertia, the impetus forward, is for her a natural state. I talked to her recently about how she maintains her momentum, even when the circumstances might at first seem unfavorable. Through the course of our conversation, we identified the first step as “self-knowledge,”  without which, one’s essence cannot be actualized, and self confidence would be fleeting.

If you don’t believe in what you’re doing, how can you expect someone else to? Nowadays, it is not enough just to be talented and hard-working, but you have to think about cultivating followers. Prior to New York, Juliana lived in a variety of places: Kahala, HI, Charleston, SC, and Salida, CO, just to name a few. Most of the time she was guided by nothing more than the feeling of being exactly where she needed to.

The movement in her work is a metaphor. Regardless of what happened yesterday, whether there was progress or setbacks, her instinct is always to “keep moving.”

Juliana is also inspired by the ocean and the subtle rhythm of a changing tide. The lifelong painter credits her mentor Knox Martin as being the one who “opened the window of art” to her. He teaches that “one shape gives birth to another,” and the same can be said for waves and opportunity, but only if one is paying attention. On October 3rd, 2013, Schott celebrated their 100th anniversary by hosting an event which featured the work of three artists on the Perfecto, their classic motorcycle jacket: Shepard Fairey,  Curtis Kulig, and Juliana Lazzaro. The opportunity with Schott came about because Charles Edmundson, who is the design director, was impressed by images he saw of the hand-painted fashion that was shown at the Tesla Motor showroom earlier in the year.

As an iconic American brand with a long trajectory, Schott NYC was an ideal match for the artist. The company was originally founded in 1913 by two brothers, the sons of a Russian immigrant…

“Irving Schott’s leather jackets were lovingly branded with the name of his favorite cigar – the Perfecto. By the mid-twenties, Schott NYC was revolutionizing the way Americans dressed for the outdoors when they were the first to put a zipper on a jacket… The Perfecto was a symbol of the excitement, adventure and danger that fueled their fascination with motorcycles…”

“At the start of WWII, Irving Schott designed and produced a “bomber jacket” that would serve and protect Our Boys as they fought for liberty in the air over Europe and the Pacific. And on deck, servicemen kept out the cold with Schott’s classic melton wool naval pea coat. Rugged and warm, these leather and wool jackets would be produced by Schott for the US Military for the next 60 years.”

The company, which is still owned and managed by members of the Schott Family, still produces the majority of their apparel here in the United States.

“As the world grew smaller and international trade became common place through online shopping and global markets, Schott expanded overseas where “Made in America” was revered and coveted, represent[ing] the heritage of America and the rebel inside everyone.”

Truly an American Original, Schott went against the grain when most companies began producing their goods overseas. Yes, in the short term, it would be more cost effective to outsource, but it would also have been much less labor intensive for Frank Lazzaro to have utilized modern methods in the construction of his cabin. Both actions say that longevity cannot be paid for with convenience. 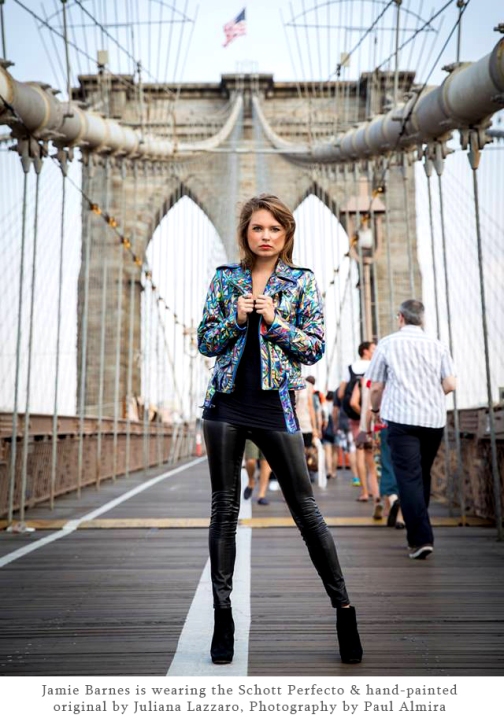 Concurrently with Schott’s centennial celebration, Juliana found another surface on which to wield her paint. In keeping with the theme of adventure and quality craftsmanship, a Ducati motorcycle helped her transition from motion into speed. She originally met the GM Steve Radt, of Ducati/Triumph NYC while visiting the showroom about three years ago.  She showed him images of her work on various guitars and an Arai motorcycle helmet. The dialogue turned out to be ongoing, and eventually culminated in the opportunity to paint one of his bikes. The 2014 Ducati Monster and hand-painted original, was showcased in the Progressive International Motorcycle Show that took place at the Javits Center from December 13th through the 15th.

On the eve of the three day show, Ducati Triumph NYC had an event where they unveiled the newest bike from Ducati. It was there that I met James Mansfield, part owner of West Village General Contracting, and a motorcycle enthusiast. He offered me a unique insight into his passion for riding, which sounded strangely familiar. “You go where you look, so if you’re heading for a tree and you panic and think that you’re going to crash into it, then that is exactly what is going to happen. You have to shift your attention.” Motorcycles, fast cars, and the men who love them, can easily be perceived as reckless adrenaline seekers, but Mansfield challenged this commonly held view. He likened his hobby to yoga, where by holding a difficult posture and focusing on his breath, he is more in tune with the moment and his surroundings.

When I set out to write this piece, it was partly to entertain and illuminate this wellspring of creative energy, but also because I wanted the answer to a persistent question. How do you stay consistent in your motivation to create? The truth is that the motivation is constant. Complacency, routine, the pursuit of stability, these are the forbears to a flat life. I am as guilty as they come and do not always stay the course. For every impulse “to do,” there are doubts and fears that well up, whispers of “what if!” We all hear voices. It may not be as dramatic as talking to oneself or having imaginary friends but there is no shortage of debilitating thoughts. Every day we make a choice and in that moment we decide which voice to listen to: insecurity, self-loathing, fear, reason, all of whom would be nothing without the energy we give them. And the voice that was once small grows into a crescendo, drowning out all other sounds. But despite the deafening noise, sleep restores balance and with every new day, we can choose again.  Juliana is selective in this regard, listening only to her Intuition and the advice of those she admires.  The inner compass has grown strong, buttressed by experience, discipline, and time. She is also grateful for the blessings that might seem small, an embarrassment of riches that would be wasted on the more vacant observer. 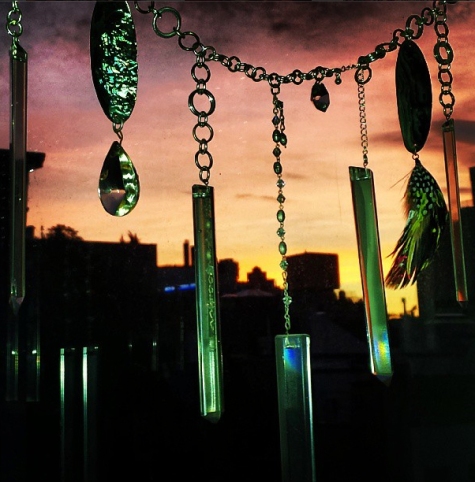 Ernest Hemingway once said that “the best people possess a feeling for beauty, the courage to take risks, the discipline to tell the truth, the capacity for sacrifice. Ironically their virtues make them vulnerable…” From what I know of the world and people, I would have to agree, which leads me to share what Juliana has called “one of the best pieces of advice [she’s] ever recieved.”
“Like a boxer in the ring, you gotta learn to take the blows- keep getting back up”.
– Knox Martin

That is the essence of motion, to be a force of nature. Trends might fall in and out of favor, but authenticity will always find a way to endure. To see what is timeless instead of transient, character over surface value, can permanently alter one’s perception. The path may be long and difficult at times, but once you know who you are, there can be no other way to live.